CoE Director's Statement on the CoE MRI and Neuroimaging Core

We are very proud of our neuroimaging core, which now consists of:

Dr. Steven Nelson, Ph.D., a neuroscientist who comes to us from Washington University in St. Louis. He is the winner of the 35th Annual O'Leary Prize for "the most original and important accomplishments in neuroscience research by a predoctoral or postdoctoral fellow” at Washington University in St. Louis for his work: A neural signature of test-potentiated learning in human parietal cortex, and has published in Neuron, the Journal of Neuroscience and Cerebral Cortex. Dr. Nelson holds the titles of Research Assistant Professor at Baylor University in Psychology and Neuroscience as well as Research Assistant Professor at the University of Texas – Dallas, Center for Vital Longevity, School of Behavioral and Brain Sciences. Steve uses multimodal functional neuroimaging to better understand the neural basis of psychiatric disorders that commonly affect Veterans, such as posttraumatic stress disorder (PTSD) and traumatic brain injury (TBI). He employs methodologies that assess brain structure using high-resolution T1- and T2-weighted images, and brain function using resting-state functional connectivity MRI (fMRI) and cognitive paradigms focusing on task-evoked activity (t-fMRI). He is now looking into using fMRI-based neurofeedback. i.e. directly training the amygdala to be calm. This could potentially be a more powerful form of neurofeedback, or we could use machine learning along with simultaneous EEG to come up with better EEG neurofeedback algorithms.

Dr. Evan Gordon, Ph.D., who comes to us from Georgetown University and has published in Nature Communications. Cerebral Cortex and Neuroimage, and is also an Research Assistant Professor at the University of Texas – Dallas, Center for Vital Longevity, School of Behavioral and Brain Sciences. Evan’s research focuses on using magnetic resonance imaging (MRI) to examine how brain networks are disrupted in Veterans with Traumatic Brain Injury. TBIs most commonly cause damage to fiber tracts in the brain that connect networked brain regions. This damage impairs the normal networked communication between these brain regions. However, due to the variable nature of these brain injuries, there is little understanding to date of how injuries specific to an individual lead to specific symptoms in TBI patients. Recent work has shown that collecting large amounts of MRI data from a single patient allows improved characterization of brain network function in that single individual patient. His current research is aimed at precisely describing brain networks of individual Veterans with and without TBI by collecting a larger amount of within-patient MRI data than has ever before been collected in a TBI study. Such precise descriptions will allow accurate identification of injured brain regions in individual patients, which in turn will help us understand how specific injuries lead to specific mental and behavioral problems. These findings will help develop future TBI treatments by using the individual-specific brain network features identified as behaviorally relevant in this work as targets for advanced future treatments.

Dr. Geoffrey May, MD, a Research Psychiatrist from Wayne State University School of Medicine, who holds the titles of Assistant Professor of Psychiatry at the University of Texas Southwestern Medical School and Assistant Professor of Psychiatry at Texas A&M Health Science Center. Geoff is a board-certified psychiatrist with a research focus in diagnosis and treatment of neuropsychiatric disorders in Veterans. He has experience in the clinical supervision of medication and medical device trials. Geoff currently specializes in mapping changes in functional connectivity due to treatments and interventions. Neurofeedback is potentially useful for treating traumatic brain injury by training damaged networks of the brain to behave like healthy ones. For many years, the mechanism of action has been a black box. By looking at resting state connectivity, he hopes to be able to understand how neurofeedback changes the way that brain networks interact. TMS has been approved as a treatment for depression, but use in PTSD is still in its early stages. We hypothesize that the vmPFC is important for extinction of post-traumatic hyperarousal. Again, finding changes in resting state connectivity, especially between vmPFC and amygdala, would be the smoking gun for TMS’s mechanism of action.

They are also supporting Dr. Jules Puschett, M.D., whose biomarker research on TBI involves Diffusion Tensor Imaging of the brains of individuals whose levels of a particular proposed biological marker of PTSD and TBI are analyzed via blood samples.

Joining us this fall will be Dr. Laura Zambrano-Vazquez of the University of Arizona, a clinical psychologist who will do her post-doctoral fellowship with us. 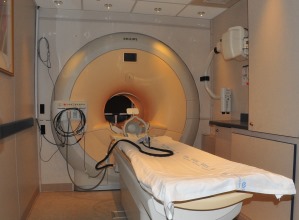 The Neuroimaging Core at the Waco CoE is currently conducting research using resting-state functional connectivity MRI (rs-fcMRI) to better characterize traumatic brain injury (TBI) in returning War Veterans. We are taking an approach pioneered by Russ Poldrack and colleagues where we collect hours of connectivity data on each patient to ensure highly reliable mapping of their individual brain networks. This allows us to look at neurological disorders in data that is robust at the individual level, as opposed to treating heterogeneous disorders like TBI as if they manifest the same in each person.

They are also collecting data collection for treatment studies using electroencephalography (EEG) – based neurofeedback in patients with TBI and transcranial magnetic stimulation (TMS) in patients with post-traumatic stress disorder (PTSD). We will continue to use rs-fcMRI to evaluate brain networks before and after treatment to understand how treatments can cause changes in the brain that relate to or facilitate recovery.

They are collecting fMRI scans of patients involved in the biomarker study at the PTSD residential program here in Waco. 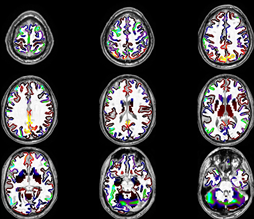 Finally, they are beginning collaborations with UT-Austin to implement state-of-the-art approaches such as real-time neurofeedback using MRI. We anticipate that in the near future we will be able to evaluate task-evoked brain activity during MRI scans and feed that activity back to the participant, who will then attempt to modulate the activity to a more healthy or neurologically normal level.

In sum, the Neuroimaging core is focused on two major lines of research that (1) characterize mechanisms of disorders such as TBI and PTSD and (2) use brain technologies to treat these conditions. This is valuable research and a credit to the Veteran’s Health Administration.