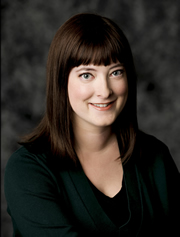 Erin C. McGlade, PhD
Co-director of the VA Advanced Fellowship Program in Mental Illness in the Salt Lake City MIRECC
MIRECC Investigator
erin.mcglade@va.gov
Dr. Erin McGlade received her PhD in Clinical Psychology from Idaho State University and completed a pre-doctoral internship and a post-doctoral residency at the University of Utah Neuropsychiatric Institute. Her clinical training was with adolescents and adults diagnosed with serious psychiatric disorders and suicidal ideation, areas of clinical interest she has carried forward in her work at the VA.
Dr. McGlade is a licensed clinical psychologist and a MIRECC investigator. She is interested in studying neural mechanisms of symptoms in co-morbid disorders, particularly the relationship between depressive symptoms and co-morbid PTSD and TBI. Her current studies focus on veterans with suicide risk with and without a history of depression. Dr. McGlade is Co-Director of the Advanced Fellowship in Mental Illness Research and Treatment at the Salt Lake City MIRECC and has been instrumental in developing curriculum for the new fellowship program.