Biography: Dr. Simonetti earned his Medical Degree from the Ohio State University in 2008 and completed his training in Internal Medicine at the University of Pittsburgh prior to serving as Chief Medical Resident from 2011-2012. He then moved to Seattle where he completed an NRSA health services research fellowship, worked as a senior research fellow in the VA’s Patient Aligned Care Team (PACT) National Demonstration Lab, and earned his Masters of Public Health degree from the University of Washington.
Dr. Simonetti joined the VA Eastern Colorado Healthcare System in 2016 where he serves as a teaching attending within the Hospital Medicine Group and works as an investigator with Rocky Mountain MIRECC and the Denver-Seattle Center for Veteran-Centered and Value-Driven Care.
Research Interests: Dr. Simonetti’s research focuses on reducing the burden of intentional and unintentional firearm injuries nationally. He joined the Rocky Mountain MIRECC to adapt his expertise in firearm injury prevention to strategies that can be used to mitigate the high burden of suicide, particularly firearm-related suicide, among American Veterans. His current focus is on developing Veteran-centered approaches to facilitating lethal means safety as a suicide prevention strategy.
Dr. Simonetti also has an appointment with the Denver-Seattle Center for Veteran-Centered and Value-Driven Care and has continued his work with the PACT Demonstration Lab in Seattle. His work includes improving Veterans’ access to services within the VHA system, using geospatial methods to investigate the effect of neighborhood environment on Veterans’ health outcomes, and improving our understanding of the prevalence and drivers of burnout among VHA primary care employees.

Simonetti JA, Azrael D, Miller M. Firearm Storage Practices and Risk Perceptions Among a Nationally Representative Sample of U.S. Veterans With and Without Self-Harm Risk Factors. Suicide Life Threat Behav. 2018 Apr 15. doi: 10.1111/sltb.12463. [Epub ahead of print] PubMed PMID: 29658142.
Despite the disproportionate use of firearms in Veteran suicides and the well-established link between firearm access and suicide, little is known about how Veterans store their firearms or what they think about the relationship between firearm access and suicide risk. Using data from 2015 nationally representative online survey (response rate 60.9%), we compare characteristics of Veteran firearm owners with and without self-harm risk factors with respect to how they store their firearms and their beliefs about suicide risk related to firearms. Overall, one in three U.S. Veteran firearm owners store household firearms loaded and unlocked, one in twenty believe that a firearm increases household suicide risk, and one in four consider their loaded and unlocked firearm to be inaccessible to suicidal household members. Storage practices and risk perceptions are similar among those with and without self-reported suicide risk factors. Affecting risk perceptions may be a critical aspect of interventions addressing lethal means safety among U.S. Veterans.
Rowhani-Rahbar A, Azrael D, Lyons VH, Simonetti JA, Miller M. Loaded Handgun Carrying Among US Adults, 2015. Am J Public Health. 2017 Dec;107(12):1930-1936. doi: 10.2105/AJPH.2017.304072. Epub 2017 Oct 19. PubMed PMID: 29048957.
OBJECTIVES: To determine the frequency of loaded handgun carrying among US adult handgun owners, characterize those who carry, and examine concealed carrying by state concealed carry laws. METHODS: Using a nationally representative survey of US adults in 2015, we asked handgun owners (n=1444) about their past-30-day carrying behavior. RESULTS: Among surveyed handgun owners, 24% (95% confidence interval[CI]=21%, 26%) carried loaded handguns monthly, of whom 35% (95% CI=29%, 41%) did so daily; 82% (95% CI=77%, 86%) carried primarily for protection. The proportion of handgun owners who carried concealed loaded handguns in the past 30 days was 21% (95% CI=12%, 35%) in unrestricted states, 25% (95% CI=21%, 29%) in shall issue-no discretion states, 20% (95% CI=16%, 24%) in shall issue-limited discretion states, and 9% (95% CI=6%, 15%) in may-issue states. CONCLUSIONS: We estimate that 9 million US adult handgun owners carry loaded handguns monthly, 3 million do so every day, and most report protection as the main carrying reason. Proportionally fewer handgun owners carry concealed loaded handguns in states that allow issuing authorities substantial discretion in granting carrying permits.
Cleveland EC, Azrael D, Simonetti JA, Miller M. Firearm ownership among American veterans: findings from the 2015 National Firearm Survey. Inj Epidemiol. 2017 Dec 19;4(1):33. doi: 10.1186/s40621-017-0130-y. PubMed PMID: 29256160; PubMed Central PMCID: PMC5735043.
BACKGROUND: While the majority of veteran suicides involve firearms, no contemporary data describing firearm ownership among US veterans are available. This study uses survey data to describe the prevalence of firearm ownership among a nationally representative sample of veterans, as well as veterans' reasons for firearm ownership. METHODS: A cross-sectional, nationally representative web-based survey conducted in 2015. RESULTS: Nearly half of all veterans own one or more firearms (44.9%, 95% CI 41.3-48.6%), with male veterans more commonly owning firearms than do female veterans (47.2%, 95% CI 43.4-51.0% versus 24.4%, 95%CI 15.6-36.1%). Most veteran firearm owners own both handguns and long guns (56.5%, 95% CI 51.1-61.8%); a majority cite protection as a primary reason for firearm ownership (63.1%, 95% CI 58.2-67.8%). CONCLUSIONS: The current study is the first to provide detailed, nationally representative information about firearm ownership among U.S. veterans. Better understanding firearm ownership among veterans can usefully inform ongoing suicide prevention efforts aiming to facilitate lethal means safety among vulnerable veterans during at-risk periods.
Read the full article on PMC
Visual Abstract: 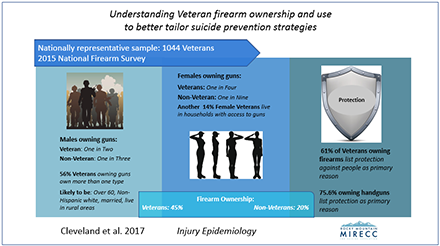 What is it about Lethal Means Safety (LMS) that makes a difference in suicide prevention? LMS is about increasing the distance between thoughts of suicide and action. In this week’s episode, we are joined by Dr. Joseph Simonetti, MD, MPH, physician and suicide prevention researcher with the Rocky Mountain MIRECC. Dr. Simonetti guides us through the fundamentals of lethal means safety, why it’s important, and provides suggestions on how to ensure that conversations about lethal means safety are Veteran-centered.

We focus specifically on firearms considering their disproportionate lethality and that firearm-related injuries account for more than 2/3 of Veteran suicides (more than in the general US population). During high-risk periods, temporary off-site storage of firearms may be the safest option by allowing an individual the opportunity to ride out an emotional crisis, connect with other resources, and for other evidence-based treatments to take effect. Dr. Simonetti dispels common misconceptions about discussing firearm safety in the context of collaborative mental health care. His poignant anecdote about what he does to help suicidal Veteran patients with easy access to loaded guns reminds us why lethal means safety is critical for effective suicide safe care.

Evaluation of a community-based safe firearm and ammunition storage intervention

Yes, You Can: Physicians, Patients, and Firearms

Public Opinion About the Relationship Between Firearm Availability and Suicide: Results From a National Survey

Temporary Transfer of Firearms From the Home to Prevent Suicide: Legal Obstacles and Recommendations