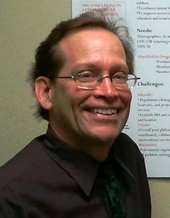 After completing psychiatry residency training at Oregon Health and Science University (OHSU), Dr. Boehnlein was a VA/Robert Wood Johnson Foundation Clinical Scholar at the Philadelphia VA Medical Center and University of Pennsylvania, where he received his masters in medical anthropology.

He has been Associate Director for Education for the VA Northwest MIRECC since its inception in 1998, has been the Director of Medical Student Education for OHSU’s Department of Psychiatry since 1993, and was OHSU’s Assistant Dean for Curriculum from 1997-2005. For the past 24 years he has been a staff psychiatrist at the Portland VAMC Mental Health Clinic and at OHSU's Intercultural Psychiatric Program, where he has treated Southeast Asian and Central American refugees.

His research has focused on cross-cultural psychiatry (particularly cultural and anthropological perspectives on posttraumatic stress disorder, and long-term adjustment of traumatized refugees), the interface of culture and medical ethics, spiritual issues in psychiatry and psychological trauma, and on medical education.
He is board certified in both general and forensic psychiatry. He is currently President of the Society for the Study of Psychiatry and Culture, an international association of psychiatric and social science researchers and educators.