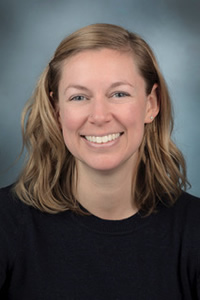 Biography: Georgia obtained a Master of Social Work degree from the University of Denver with a focus on family systems in 2012. Her previous experience focused on child welfare at the Denver Department of Human Services as well as medical social work at Swedish Hospital. Georgia joined the MIRECC in 2012 and has filled the role of Research Assistant for various projects, Co-Investigator and is currently a study clinician.
Clinical and Research Interests: Posttraumatic stress disorder and co-morbid substance use disorders, Problem-Solving Therapy, suicide risk and prevention in Veterans that experience Moral Injury, family systems interventions for suicide prevention.

In this week's episode Adam discusses moral injury with Georgia Gerard, LCSW, a social worker at Rocky Mountain MIRECC for Suicide Prevention. Moral injury is distinct but can also overlap with PTSD. It is important to tease out the differences and then help the individual back to a a place of acceptance.

The podcast is approximately 18 minutes long.