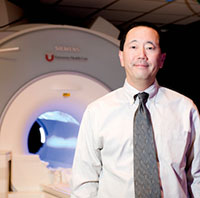 Dr. Douglas Kondo received his M.D. from the University of Utah and completed his adult psychiatry training at the Menninger Clinic and his child & adolescent psychiatry fellowship at Duke University. He then served as a research fellow at the Duke Clinical Research Institute prior to joining the faculty of the University of Utah. In addition to the MIRECC, Dr. Kondo is Associate Professor of Psychiatry, University of Utah School of Medicine, he is a member of the University of Utah Brain Institute, and a USTAR (Utah Science Technology and Research initiative) investigator.
Dr. Kondo directs the suicide prevention consultation service, and the safety committee, at the VA Salt Lake City station. He has served as principal investigator (PI) on a neuroimaging treatment study for Veterans with treatment-resistant major depressive disorder. In collaboration with the MIRECC Medical Director Dr. Perry Renshaw, Dr. Kondo is working to integrate magnetic resonance imaging and spectroscopy (MRI/MRS) neuroimaging into investigations of the causes of, and novel treatment for, Veterans who suffer from mood disorders, suicidal behavior, substance use disorders and traumatic brain injury. Projects include translational MRI/MRS studies of bipolar disorder and treatment-resistant major depressive disorder, a biomarker study aimed at distinguishing unipolar vs. bipolar depression with a blood test, and studies of the brain chemistry changes exhibited by methamphetamine users.
Dr. Kondo has also assisted Dr. Renshaw, the Salt Lake City site PI, with VA Cooperative Studies Program (CSP) protocols; these include a study of repetitive transcranial stimulation (rTMS; CSP #556) and a study to determine if the drug lithium carbonate reduces suicide attempts in Veterans with mood disorders (CSP #590).
Finally, Drs. Kondo and Renshaw are collaborating on a series of epidemiological studies. Utilizing data obtained from the Centers for Disease Control and Prevention (CDC), they have been examining the effects of altitude on the local rate of mental illness and substance use in the population. The underlying hypothesis of this work is that the “hypobaric hypoxia” attributable to decreasing barometric pressure at increasing altitude, alters both energy metabolism and neurotransmitter concentrations in the brain – and that these changes, in turn, affect the regional prevalence of both psychiatric disorders and addictions as one ascends in altitude. Thus far, the team has published positive findings for altitude’s association with completed suicide in the U.S. population as a whole, completed suicide in persons with bipolar disorder, depressive episodes, cocaine use, methamphetamine use, and attention-deficit hyperactivity disorder (ADHD).