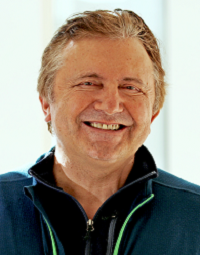 Title: Clinical/Research Psychiatrist
Contact information:
tpostola@psych.umaryland.edu
Dr Teodor T. Postolache’s research is focused on influences of physical, chemical and biological environmental factors on mental health through immune, circadian and metabolic pathways. Dr. Postolache is a Professor of Psychiatry at University Of Maryland School Of Medicine, and a Research Investigator with the VISN 5 MIRECC (Baltimore, MD) and Rocky Mountain MIRECC (Denver Co). A graduate of the Cluj-Napoca Medical School in Romania, Dr. Postolache completed postgraduate studies in medicine in Vienna (Austria) and Paris (France), his residency training in Psychiatry at the Beth Israel Medical Center (New York, NY) and a research fellowship at the Section on Biological Rhythms at NIMH.
Dr. Postolache is a board-certified psychiatrist and a licensed physician in Maryland and the District of Columbia, and is certified in Behavioral Sleep Medicine. His research involves multilevel, concentric, multi-site collaborative approaches. He published more than 100 articles and chapters, and was the editor of two books. His research was funded by NIH, VA, NARSAD, and AFSP.
Dr. Postolache is a member of the Genetics & Neurobiology Task Force of the International Association for Suicide Prevention. In 2013 he was awarded a Distinguished Investigator Award from the American Foundation for Suicide Prevention.
Dr. Postolache’s affiliation with the MIRECC is fundamentally driven by the tremendous opportunity to identify intersections between molecular and neuropsychological markers with the ultimate goal of reducing suicide risk in veterans.
Dr. Postolache is a hiking and tennis enthusiast, and an owner of two dogs- one huge and calm and one tiny and feisty. His favorite Colorado activity is rapidly evolving from skiing and hiking to contemplating the mountains - he attributes to an aging effect.
However, his favorite line remains one he saw in a subway car on his way from the airport to NYC, when he just arrived in the US in 92, reading “Don’t just play it safe”. This “command” still drives his research philosophy to this day.

Lund-Sørensen H, Benros ME, Madsen T, et al. A Nationwide Cohort Study of the Association Between Hospitalization With Infection and Risk of Death by Suicide. JAMA Psychiatry. Published online August 10, 2016. doi:10.1001/jamapsychiatry.2016.1594.
Importance Findings suggest that infections might be linked to the development of psychiatric disorders and suicidal behavior. Large-scale studies are needed to investigate the effect of infection on the risk of suicide. Objective To estimate the association between hospitalization with infection and the risk of death by suicide. Design, Setting, and Participants Nationwide, population-based, prospective cohort study with more than 149 million person-years of follow-up. Data were analyzed with survival analysis techniques and were adjusted for sex, age, calendar period, cohabitation status, socioeconomic status, and the Charlson Comorbidity Index. Individual data were drawn from Danish longitudinal registers. A total of 7.22 million individuals 15 years or older living in Denmark between January 1, 1980, and December 31, 2011, were observed during a 32-year follow-up period. Main Outcomes and Measures The risk of death by suicide was identified in the Danish Cause of Death Register. Incidence rate ratios (IRRs) and accompanying 95% CIs were used as measures of relative risk. Results In 7 221 578 individuals (3 601 653 men and 3 619 925 women) observed for a total of 149 061 786 person-years, 32 683 suicides were observed during the follow-up period. Among the suicides, 7892 (24.1%) individuals had previously been diagnosed as having an infection during a hospitalization. Hospitalization with infection was linked to an elevated risk of suicide, with an IRR of 1.42 (95% CI, 1.38-1.46) compared with those without prior infection. Dose-response relationships were observed with respect to the number of hospital contacts for different infections. For example, having 7 or more infections was linked to an IRR of 2.90 (95% CI, 2.14-3.93). The number of days of treatment for infections was associated with an elevated risk of suicide in a dose-response relationship. More than 3 months of hospital treatment was linked to an IRR of 2.38 (95% CI, 2.05-2.76). The population-attributable risk associated with hospitalization with infection accounted for 10.1% of suicides. Conclusions and Relevance An increased risk of death by suicide was found among individuals hospitalized with infection in prospective and dose-response relationships. These findings indicate that infections may have a relevant role in the pathophysiological mechanisms of suicidal behavior.
Raheja UK, Fuchs D, Giegling I, Brenner LA, Rovner SF, Mohyuddin I, Weghuber D, Mangge H, Rujescu D, Postolache TT. In psychiatrically healthy individuals, overweight women but not men have lower tryptophan levels. Pteridines. 2015 Jun;26(2):79-84.
Gender differences in tryptophan (TRP) breakdown in obese individuals have been previously reported. This could be both contributory to, as well as a consequence of, gender differences in mood changes among obese people. To exclude the potential effect of depression on TRP breakdown and its levels in obesity, we replicated analyses in psychiatrically healthy individuals. In 1000 participants, plasma kynurenine (KYN), TRP, and the KYN/TRP ratio were compared between overweight/obese and normal-weight individuals using analysis of covariance, with adjustment for age and gender. Bivariate post hoc tests were also conducted. There were no significant relationships between KYN, TRP, or the KYN/TRP ratio and overall overweight/obese status. However, a significant gender by weight category interaction was identified for TRP only, with overweight/obese women having lower TRP than overweight/obese men (p = 0.02). No gender differences in TRP were found in non-obese participants. Our study in psychiatrically healthy individuals suggested that lower TRP levels in obese women were not secondary to depression, strengthening the possibility that TRP levels could mediate depression in vulnerable women. Thus experimental manipulations of TRP levels could be used to advance theoretical knowledge, prevention, and clinical control of depression in obese women.
Keywords: gender differences; obesity; tryptophan; women
Return to Top