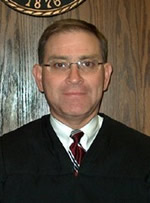 Our episode this week is our first as part of the VA Podcast Network and our 98th overall. Judge David Shakes presides over the 4th Judicial District Veterans Trauma Court (VTC) which encompasses El Paso and Teller Counties, Colorado. From January 2007 through January 2008 Colonel Shakes was assigned to Task Force 134, Multi-National Force-Iraq as the Rule of Law Advisor and Political/Military Advisor at the US Embassy in Baghdad, Iraq. In that capacity, he worked with Iraqi judges, prison officials, and the Ministers of Justice and Human Rights to improve the Iraqi criminal justice system concerning detention and prosecution of terrorists and insurgents. Prior to serving in Iraq, Colonel Shakes was the Chief Trial Judge of the Army Reserve.

In this podcast, Judge Shakes describes how the VTC is modeled after problem-solving drug courts. The court is for Veterans ready to take responsibility for themselves and their actions. The Veterans are connected to services that might range from the Veterans Administration, Veterans Justice Outreach Specialists, the Vet Center, the Family Care Center, the Peer Mentor Program, Operation TBI Freedom, and other community organizations. Judge Shakes talks about the role that trauma and/or substance abuse plays in the lives of these Veterans and how the skills they learned and used when in the military can be some of the same skills that help them out of their current straits.
Judge Shakes has anecdotes from his courtroom of success and resilience that he relates with candor. He never forgets that the role of the courts must be to increase public safety while keeping in mind that if the VTC can find alternatives to incarceration these Veterans can return to fully participating in community and society. This is a message of hope and redemption through hard-work and helping hands.

If you are a Veteran and want to volunteer in a Colorado Veterans Trauma Court find information by clicking here.

You can also email Joseph Ellis at joseph.ellis@judicial.state.co.us and he will get you in touch with a mentor program near you.

Listen to an earlier episode: Veterans Treatment Courts with Joseph Ellis; which centered on being a mentor to other Veterans.