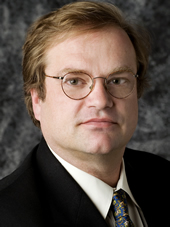 Dr. Perry Renshaw is a USTAR Professor of Psychiatry at the University of Utah School of Medicine as well as the Director of the Magnetic Resonance Laboratory at the Brain Institute at the University of Utah. Dr. Renshaw received an MD and a PhD in biophysics from the University of Pennsylvania as well as an MBA from Bentley College.
Prior to Dr. Renshaw's recruitment to the University of Utah and the Rocky Mountain MIRECC in 2008, he spent fifteen years on the psychiatry faculty at Harvard Medical School, where he served as director of the Brain Imaging Center at McLean Hospital. Dr. Renshaw is an internationally recognized authority on the use of magnetic resonance spectroscopy methods to evaluate individuals with psychiatric and substance abuse disorders.
His work with the Rocky Mountain MIRECC has focused on the role of altitude as a novel risk factor for suicide. The increased risk of suicide in those who live in mountainous regions may be partly related to elevated rates of depression and drug abuse. Ongoing studies are designed to investigate how brain chemistry changes with altitude, which may lead to novel interventions designed to reduce the risk of suicide.