Chief complaint:
Patient states: “the aneurysm affected my learning center and memory” and that he “lost his compass”.

History of present illness:
Mid-fifties male (college-education) who reports severe difficulties with planning, organizing and retrieving of information. This includes having to repeatedly read articles in the newspaper to retain content and checking date on newspaper for orientation. The patient’s wife reports that she leaves him notes and reminders to structure his day. She also reports that he cannot visualize completing tasks and often forgets when he last ate. He can navigate to familiar places and complete simple tasks with written instructions. He also endorsed symptoms of depression including low energy, feelings of worthlessness, difficulty falling asleep and poor sleep hygiene, irritability (especially when driving), and low frustration tolerance.

Past medical/psychiatric history:
Cerebral aneurysms x 3 (2 treated prior to rupture 7 years before this presentation); mild traumatic brain injuries x 2 more than 20 years ago with minimal loss of consciousness; gastroesophageal reflux disease; no history of psychiatric medications, treatment or hospitalizations; remote diagnosis of PTSD (currently in remission); no use of street drugs, minimal use of alcohol; no seizure activity; chronic back pain; multiple lumbar/sacral spinal surgeries.

Neuropsychologic test results:
The patient functions within the average-high average range of intellectual ability (full scale IQ=112). Auditory processing is within the superior range, while visual information processing is average. Although he is able to learn new information with practice, decay occurs over long time delays. In addition, memory is compromised due to his inability to organize effective retrieval. Executive functions are generally intact, with mild problems in planning and organization.

Neuroimaging:Note: A guided discussion of the relevant functional anatomy begins below the clinical images. 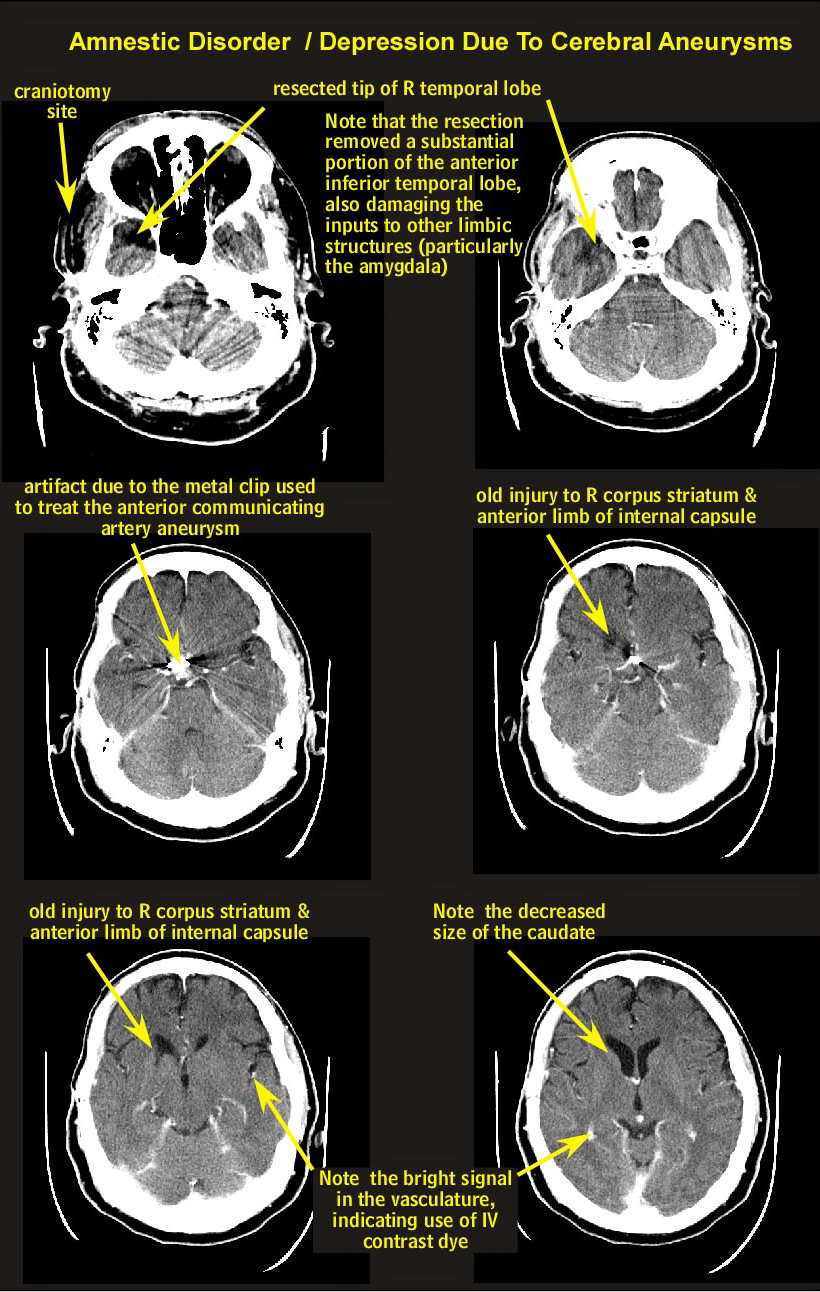 Now open the axial atlas (it will open in a new window) and find the slices that most closely match the patient’s CT imaging (hints below).  Axial Atlas 1

Identify the major arteries that supply blood for these lobes discussed above. Note that the temporal pole (site of the craniotomy) is supplied by the Middle Cerebral Artery, whereas the basal forebrain (site of the aneurysm) is part of the Anterior Cerebral circulation (Anterior Communicating branch). Match the anatomical slices with the patient’s CT and review the vascular territories in more detail. Note that the Anterior Cerebral Artery supplies the head of the caudate and adjacent internal capsule.

The Anterior Communicating Artery lies just above the septal nuclei, which are part of the basal forebrain. Find the Basal Forebrain summary (Intro to Neuroanatomy page 10) to locate this area on MR imaging.

The septal nuclei project to the diagonal band of Broca, then into the hippocampus, which in turn projects back to the septal nuclei via the fornix. The septal nuclei are important sources of acetylcholine for memory circuits. Open the Introduction to Circuits (it will open in a new window) and find the Circuit of Papez (Intro to Circuits page 5).  Injury to the basal forebrain or its connections can lead to Alzheimer’s-like problems with memory, such as this patient experiences.
Intro to Circuits

Key points for the patient interview (in addition to standard medication visit Qs):
The supervising clinician should remind the trainee to -
* ask about patient’s perception of memory deficits (including what medications he is on and what were the instructions for taking the medications)
* ask about use of compensatory strategies (such as use of daily notebooks, etc.)
* ask about ability to navigate the clinic environment
* ask about markers for depression or other changes in mood/thought
* ask about symptoms of seizure
* observe patient’s ability to shift sets, to understand medication directions<