Chief complaint:
Patient reports that he is having memory problems, can‘t focus, and is very angry since returning from Iraq.

History of present illness:
Middle aged male who is seeking help for the above symptoms more than 3 years after returning from Iraq. While in Iraq, he was exposed to 2 improvised explosive devices (IEDs) and mortar fire while driving at high rates of speed (no motor vehicle accidents [MVAs]). The patient had no loss of consciousness (LOC) with either event but was dazed, “rattled” and slightly confused. Shortly after the last event (while still in Iraq), the patient developed tinnitus, headaches, blurred vision, and light sensitivity. After return from Iraq, he noticed that his personality had changed - “explosive” and scared to drive. As a result, he was unable to resume his previous occupation (which required some driving), and had failed at multiple other jobs. He also reported nightmares of Iraq, depressive feelings, history (hx) of intermittent suicidal ideas with no intention, plans, or past attempts, decreased sleep, and appetite, and intermittent bifrontal headaches. The patient denied any staring spells with loss of time and inability to return to conversation at hand. No auras or known seizures.

Past medical/psychiatric history:
The patient reports being hit in the back of the head with a baseball bat 20 years prior. He was intoxicated at the time and does not know if there was LOC. He denied any cognitive, emotional, or other sequalae from the incident. He continued to function normally until the blasts in Iraq. The patient reported intermittent moderate alcohol (ETOH) usage approximately 10 years ago, but denied any other drug usage or current ETOH. The patient also has a hx of hypertension, urinary calculus, and minor surgeries. He had one 24-hour psychiatric admission for suicidal ideas 2 years after returning from Iraq with follow-up care in an outpatient setting. The patient continued outpatient medication management with limited symptom improvement until the current referral.

Mental status exam:
Appearance: well groomed; alert and orientedx3; Coherent. Affect: labile. Patient was intermittently irritable and angry during the interview, as well as tearful with reminders of Iraq. The patient cannot focus on the interview due to worry over legal issues. + circumstantial at times. + flight of ideas. No suicidal or homicidal ideas, intent, plans. No hallucinations or delusions or ideas of reference. Speech fluent without any word finding difficulties. Insight was poor.

Previous Neuroimaging results:
MRI from another institution 10 months prior to this examination reported “bifrontal encephalomalacia and gliosis in the parasagittal cortex; right worse than left”.

Neuroimaging:
Note: A guided discussion of the relevant functional anatomy begins below the clinical images. 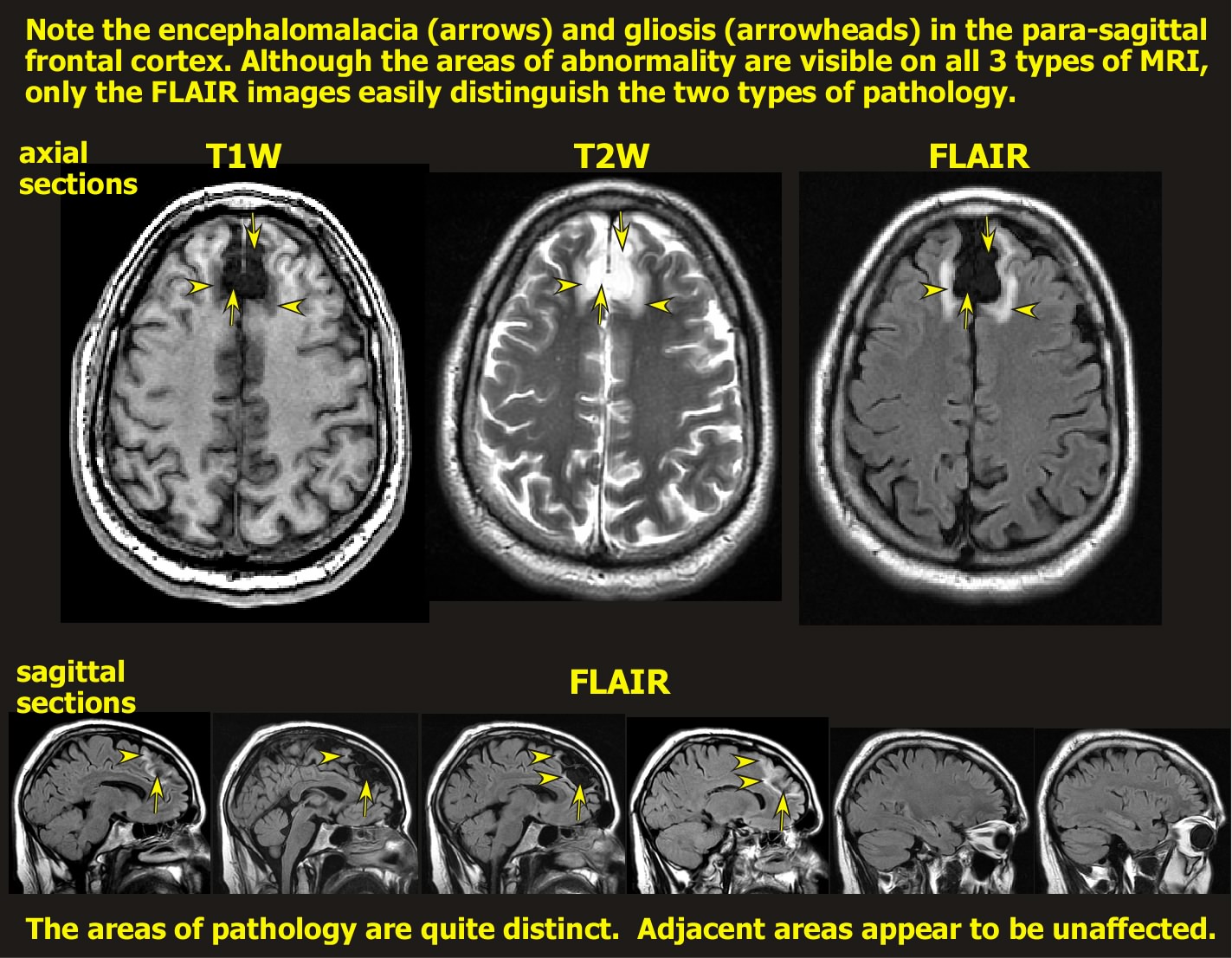 Now open Axial Atlas 1& 2  (they will open in new windows) and find the slices that most closely match the patient’s MRI (hints below). Can you match the location of lesions you see on imaging to these maps?
Axial Atlas 1
Axial Atlas 2

Do you think the patient has both left and right lesions? If so, what are the matching functions to these areas? Remember that clinical images are routinely provided in the radiographic perspective (Intro to Neuroanatomy page 3) in which the left side of an axial or coronal image is the right side of the patient's brain. Do you think his lesions extend to the cingulate cortex? What about the white matter fiber tracts? Are they injured? If so, what is the significance of that? What about the basal forebrain? Where is it (Intro to Neuroanatomy page 10)?

Emotion, cognition, and behavior are produced from a complexity of circuits. Open the Introduction to Circuits (will open in a new window).
Intro to Circuits

If the patient has both cognitive and emotional sequelae from the injury, look at the maps of the frontal circuits and identify the circuits that might have been injured. Is it more likely that the affected tracts are cortical association tracts (Intro to Circuits page 2) or prefrontal-subcortical tracts (Intro to Circuits pages 3,4)? Trace their paths through the subcortical structures to fully understand the circuit (Axial anatomy 2).

What about the anger and the sustained attention? Is there a connection to the PTSD? What is the functional anatomy of the memory circuits (Intro to Circuits page 5)? In this case, what is the most significant circuit relationship between frontal lobes and temporal? Tell me about the Diagonal Band of Broca and its connections to the hippocampus (Intro to Neuroanatomy page 10). It connects to the hippocampus, which in turn projects back to the septal nuclei via the fornix. How does the cingulate cortex relate to memory and to emotional control (Intro to Circuits page 5)?

Vascular territories:
Locate the axial sections (Axial anatomy 1) that match the areas of injury on patient's MR images (hints below). Note the arteries that supply the area of frontal cortex that is injured in this patient. What is significant about the anterior communicating artery? Can you think of any future vascular vulnerabilities for this patient?

Discussion of coup-contra-coup & blast physics:
What is the significance of the previous blow with the baseball bat? Do you think this injury is likely the result of blast and shearing or from the previous assault?windows-2006-blast-related-TBI

Answer: The nature of the pathology is not consistent with a coup-contra-coup injury. A blow to the back of the head would be expected to make the brain bounce forward. The most likely areas to be injured with such a blow would be the frontal and temporal poles and the orbitofrontal cortex (depending on whether the brain moved only forward or forward and down). The injury in this case is entirely between the hemispheres. The polar and inferior areas are not injured. The dura is intact between the hemispheres. The areas of tissue destruction are very circumscribed. Gliosis extends into the white matter. Gliosis extends into white matter areas in which the overlying cortical ribbon is of normal appearance. Thus, this is likely a shearing injury at the gray matter - white matter (GM-WM) interface, with consequent neuronal degeneration due to axotomy. The patient was traveling at a high rate of speed in a vehicle when exposed to the blasts. Thus, both deceleration and blast forces may be involved.

Key points for the patient interview (in addition to standard medication visit Qs):
The supervising clinician should remind the trainee to -
* Should you ask about awareness of the anger and how the patient perceives others think of him?
* How is the emotional lability affecting daily life?
* With the deficits in sustained attention, is the patient able to do his ADLs (i.e. grocery shop, follow a movie plot, navigating successfully when driving, etc..)?
* What are the most bothersome symptoms to the patient?
* What is his first goal for improvement?
* What do you as the clinician suggest for the anger and control of “temper”?
* What is the relationship between suicide and TBI?
* What do you do about the focus on the legal issues? What is his mental status exam score today?
* Does he need an electroencephalographic (EEG) examination?
* Any repeat imaging? If so at what time-frame?
* Would you discontinue, adjust, or add any new medications at this point in time?
* What TBI, anger management, or PTSD reading materials/references would you give him?
* Do you think he is able to participate in anger management classes at this point in time?
* Does the patient need outpatient case management, vocational rehabilitation or other service referrals?