Chief complaint:
"I have had a stressful few weeks and my memory seems worse."

History of present illness:
Middle aged obese male with history of > than 20 blast exposures from RPGs, IEDs, mortars (~ 4-6 years prior to today's exam). Additionally, he had MVA 10 years prior to the exam (4-5 years prior to above blasts) with ejection from vehicle and 5-6 days of loss of consciousness (LOC) with no formal rehabilitation. From the blasts, at least 2 had 1-30 minute LOC with an additional 3 having disorientation / confusion from 30 min - 24 hrs; 3 blast exposures had posttraumatic amnesia (PTA) of 30 min - 24 hrs. In one particular blast, 2 nearby service members.

Past medical/psychiatric history:
Humeral and clavicle fractures with the MVA; Ulnar neuropathy/cubital tunnel syndrome after ulnar fracture from one of the IEDs; chronic headaches; obesity; low back pain; tinnitus. No psychiatric concerns, assessments, treatments, admissions, or suicidal ideas prior to blast exposures. No allergies. Failed medication trials from past include amitriptyline, quetiapine, diphenhydramine, cyclobenzaprine, zolpidem.

Neuropsychologic test results:
Patient is functioning in borderline range with full scale IQ of 70 (verbal of 70; performance of 76). ATTENTIONAL SKILLS and concentration were borderline to impaired; Psychomotor speed and divided attention were borderline to impaired; Rapid visual processing was also impaired. MOTOR SKILLS: Copying speed and gross motor speed were impaired. LANGUAGE SKILLS: There were no problems with spontaneous speech or ability to understand directions. WAIS-III Vocabulary and Comprehension were borderline, and forming categories on Similarities was impaired, while fund of facts on Information was low average. Verbal fluency and processing speed were low average. VERBAL LEARNING AND MEMORY: Initial recall was borderline, but ability to learn over 5 trials was average and retained a low average amount following an interfering list and a borderline amount on 20-minute delay. Recognition was borderline. Memory for the interfering list was average. VISUAL PERCEPTION/CONSTRUCTION/MEMORY: He reported no problem with primary visual acuity. Perception of missing detail was impaired. Assembly on Block Design was average but the copy of a complex figure was severely impaired. The 3-minute recall of the complex figure was impaired. Immediate and delayed memory for simple figures was impaired.EXECUTIVE SKILLS: Category abstraction visual logic, and problem solving and mental flexibility were borderline to impaired. Sequencing was average. There were 4 repetitions and 14 intrusion errors. Thought processing speed was low average. The complex figure copy showed moderately to severely impaired planning, organization skills, and attention to detail. TEST TAKING BEHAVIOR: His abnormal performance suggested he performed at much less than his full capacity. 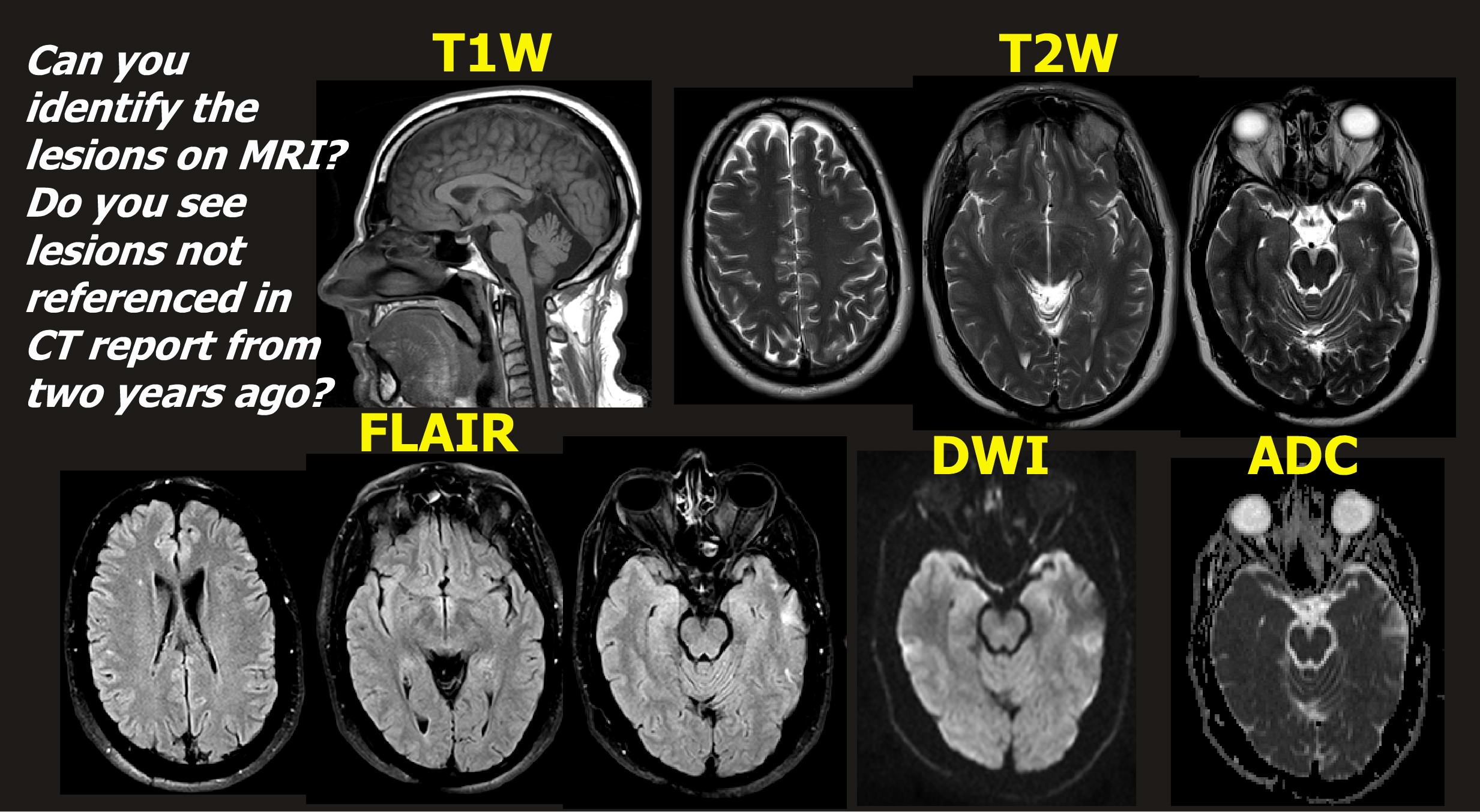 Neuroimaging 2:Clinical images with labels
Note: A guided discussion of the relevant functional anatomy begins below the clinical images. 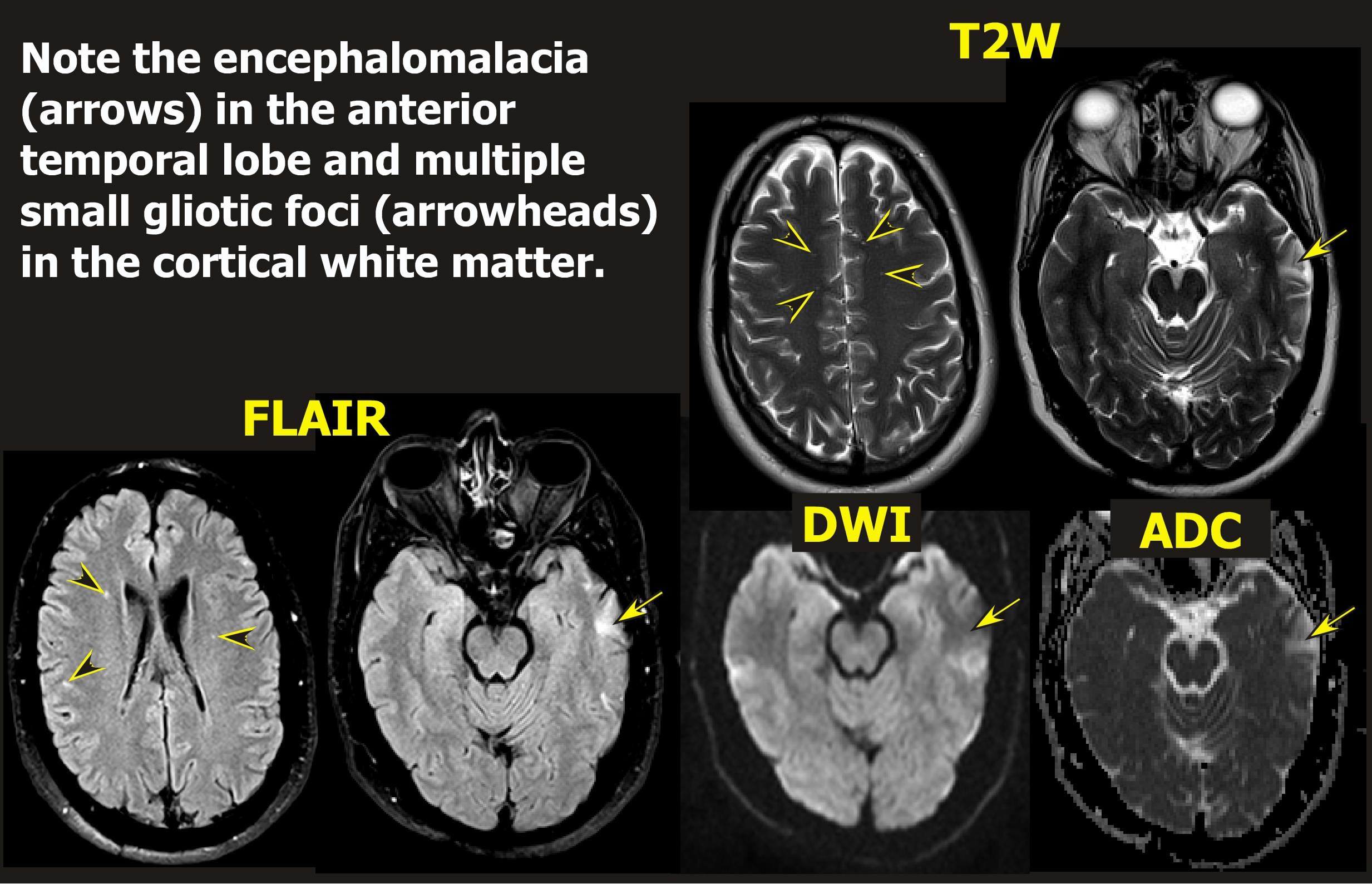 Does the patient have both left and right lesions? If so, what are the matching functions to these areas? Remember that clinical images are routinely provided in the radiographic perspective (Intro to Neuroanatomy page 3) in which the left side of an axial or coronal image is the right side of the patient's brain. Look again closely at the images. What cellular and tract areas might have been affected? Is it more likely that the affected tracts are cortical association tracts or prefrontal-subcortical tracts?

Emotion, cognition, and behavior are produced from a complexity of circuits. Open the Introduction to Circuits (will open in a new window). If the patient has both cognitive and emotional sequelae from the injury, look at the maps of the frontal circuits and identify the circuits that might have been injured (Intro to Circuits pages 2-4). Trace their paths through the subcortical structures to fully understand the circuit (Axial Atlas 2).
Intro to Circuits

Connections between PTSD, memory, and the temporal lobes (Intro to Circuits page 5) - What about the connection to PTSD? What is the functional anatomy of the memory circuits? What are the roles of the hippocampus, fornix, amygdala, mammillary bodies and thalamus in memory?

Discussion of blast physics and repetitive injury influences:
What is the significance of the proximity to the blast? What are primary, secondary, and tertiary injuries? How do PTSD and TBI interact? Are this patient's injuries commonly described brain injuries (i.e., subdural, contusion, or diffuse axonal injury)?
windows-2006-blast-related-TBI
windows-winter09-PTSD-polytrauma

Influence of chronic pain:
How does chronic pain affect the above diagnoses? What are the circuits of chronic pain? What about post-traumatic headaches? What does the recent VHA-DoD Consensus Conference say about the triad of chronic pain, PTSD, and TBI in Veterans returning from combat zones? What do the VHA-DoD Clinical Practice Guidelines (CPGs) for TBI and Chronic Pain advise with regards to benzodiazepines?
Report_Consensus_Conf_Practice_Recommend_TBI_PTSD_Pain.pdf
CPG_Management_Concussion_mTBI
CPG_Management_Opioid_Tx_Chronic_Pain

Key points for the patient interview (in addition to standard medication visit Qs):
The supervising clinician should remind the trainee to -
* Ask about patient's perception of memory deficits. How have they changed since the last visit?
* How are the PTSD and mood symptoms affecting his daily functioning?
* What are the most important next steps for him?
* What are his goals for the next few months?
* How is he coping with the new life stressors?
* Have there been any seizures?
* What about starring spells with loss of time where he could not return to the conversation?
* Any repetitive motor behaviors or unusual body sensation associated with starring spells?
* Any connections to the incontinence?
* Does he need an electroencephalographic (EEG) examination?
* Any repeat imaging? If so at what time-frame?
* What would you do about the headaches?
* Would you change or adjust any of the patient's current medications?
* What would you do about the benzodiazepines?
* Does he need a cognitive rehabilitation program?
* What TBI or PTSD reading materials/references would you give him?
* Does the patient need outpatient case management, vocational rehabilitation or other service referrals?

Key points for discussion with the Trainee after the patient interview:
* Do you understand the connection between the anatomy and imaging findings?
* Do you understand the circuits?
* Could you see the symptom overlap between the diagnoses?
* What are the worrisome aspects for this patient for the future (i.e. other injuries, narcotic or benzodiazepine addiction, management of life stressors, etc.)?
* Do you understand why the follow-up is when it is?
* Do you have any questions about what the interview covered?
* Should we have done anything different at the visit?
* If the current medications fail, what would be the next choices?