Chief complaint:
Patient reports that he is having memory problems, dizziness and headaches (HA) since returning from Iraq.

History of present illness:
Early 30's male (high school education) with > 30 blast exposures in Operation Iraqi Freedom (OIF), with loss of consciousness (LOC) for approximately 1 hour after the most significant and last exposure (1 year prior to this exam). More detailed questioning revealed that during the his service in Iraq the patient was exposed to approximately 30 blasts and sustained 5 “concussions” with no LOC or post traumatic amnesia (PTA) until the most recent one. Of note, 6 months prior to that event he was exposed to a blast that caused dizziness and headache (HA) as well as other post-concussive symptoms (PCS) but returned to baseline in ~ one week. When queried about sequelae to the most recent event, patient reported memory difficulties, HA, dizziness, word retrieval difficulties, photosensitivity, irritability, confusion, mood lability, increased anxiety, nightmares, hypervigilance, and insomnia. When queried about his current symptoms, patient noted having constant 4/10 HA daily, usually on the left side and severe 10/10 HA “several times per month” that usually begin on left parietal region and radiate to entire head with pain described as “squeezing”.

In detailing the most significant blast, the patient feels that it is the one responsible for his current difficulties. In this one he reportedly sustained LOC for 60 minutes following a 15 minute period of consciousness. He remembers sitting in the back of the vehicle and then “passing out”. He reported that his period of LOC was unwitnessed. Records from Iraq indicate he was seen shortly after the attack for treatment and denied experiencing vertigo, dizziness, or visual disturbances. His MACE (Military Assessment of Concussion) score at that time was 25/30. Three days later, a head CT from Balad was normal but his MACE had dropped to 19/30. He demonstrated considerable gait abnormalities and presented in a "dramatic fashion". A psychiatric evaluation at that time reported that the symptoms were not typical for PCS but were "theatrical". His MACE had improved on that day to 24/30. Two weeks later, the patient was seen by Speech-Language Pathology and the evaluation revealed word retrieval problems and impulsivity.

Past medical/psychiatric history:
No significant past medical history prior to service. No history of alcohol (ETOH) or other substance use, suicide attempts, or psychiatric hospitalizations. Medical treatment post return to USA included diagnoses of post-traumatic HA, s/p traumatic brain injury (TBI), and post traumatic stress disorder (PTSD) - treatment occurred in both inpatient and outpatient rehabilitation settings. The patient is now in outpatient treatment.

Neuropsychologic test results:
It is estimated that the patient was functioning in the low average to average range premorbidly. He had a high school education. The patient‘s performance 1-year after that last blast was in the borderline range in immediate memory and visuospatial/construction and in the low average range in language. His performance in the domain of attention and delayed memory fell in the moderately and mildly impaired ranges, respectively. He displayed poor performance on measures assessing attention, and fell in the impaired range when assessing cognitive flexibility and hypothesis testing. Testing also reflected a severe degree of symptoms of anxiety (Beck Anxiety Inventory, BAI), and he endorsed symptoms of moderately severe depression (Beck Depression Inventory, BDI). In summary, neuropsychological evaluation revealed cognitive deficits in immediate and delayed memory, attention, visuospatial skills, verbal fluency, cognitive flexibility, and concept formation.

Neuroimaging:
Note: A guided discussion of the relevant functional anatomy begins below the clinical images. 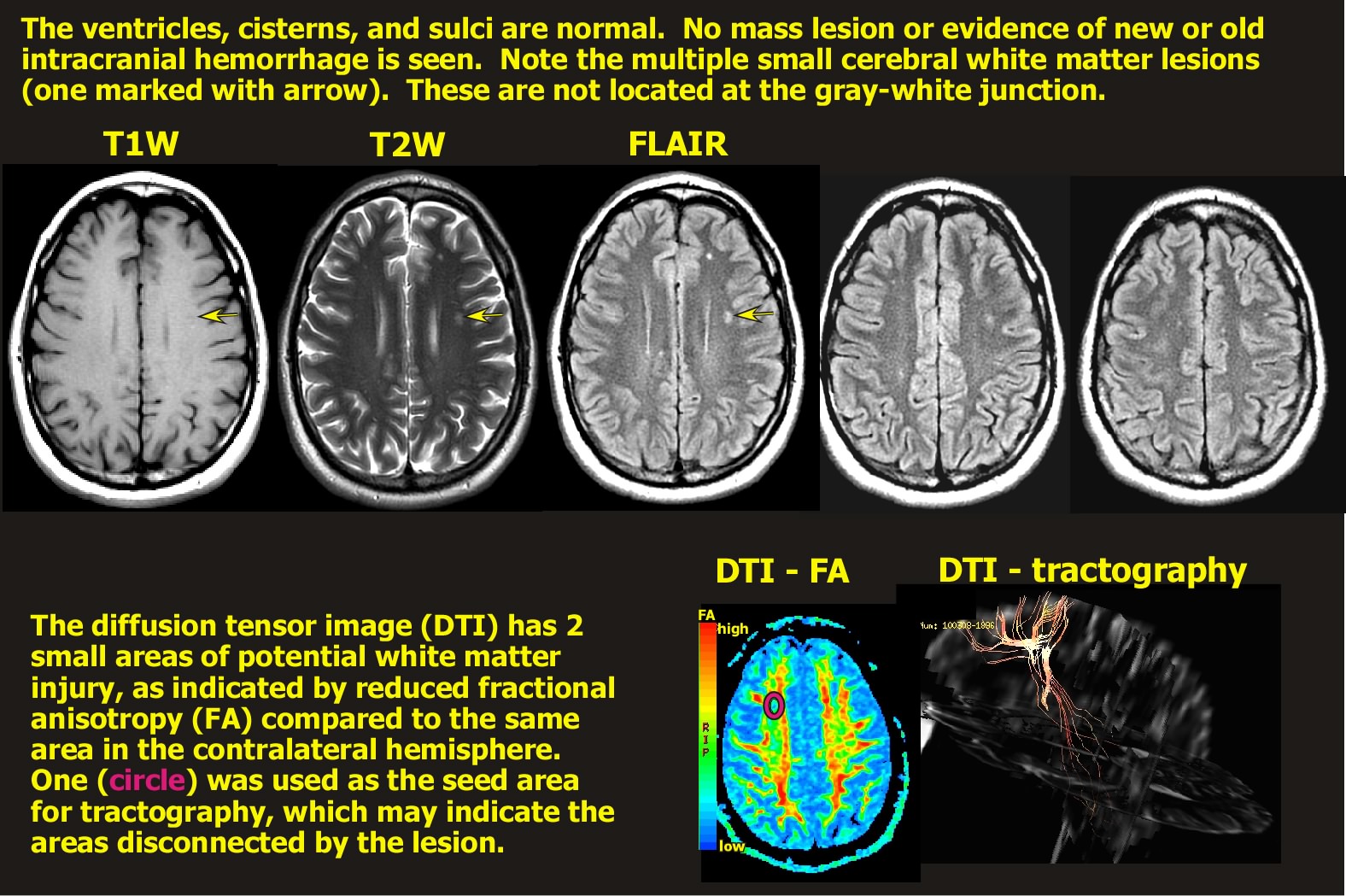 Now open the Axial Atlas 1& 2  (they will open in new windows)and find the slices that most closely match the patient’s MRI (hints below). Can you match the location of lesions you see on imaging to these maps?
Axial Atlas 1
Axial Atlas 2

Find the surface anatomy map of cortical functions(Intro to Neuroanatomy page 8). Does the patient have both left and right lesions? If so, what are the matching functions to these areas? Remember that clinical images are routinely provided in the radiographic perspective (Intro to Neuroanatomy page 3) in which the left side of an axial or coronal image is the right side of the patient's brain.

Emotion, cognition, and behavior are produced from a complexity of circuits. If the patient has both cognitive and emotional sequelae from the injury, look at the maps of the frontal circuits (Intro to Circuits pages 3,4) and identify the circuits that might have been injured. Trace their paths through the subcortical structures (Axial Atlas 2) to fully understand the circuit.

What about the connection to PTSD? What is the functional anatomy of the memory circuits (Intro to Circuits page 5)? Tell me about the hippocampus, fornix, amygdala, mammillary bodies, thalamus. What are their roles in memory?

Vascular territories:
Locate the axial sections (Axial anatomy 1) that match the areas of injury on patient's MR images (hints below). Note the arteries that supply the frontal cortex and subcortical regions of the circuits.

Discussion of blast physics and repetitive injury influences:
What is the significance of proximity to the blast? What are primary, secondary, and tertiary injuries? How do PTSD and TBI interact?

Key points for the patient interview (in addition to standard medication visit Qs):
The supervising clinician should remind the trainee to -
* Ask about patient‘s perception of memory deficits. How are they affecting his return to civilian life?
* How are the PTSD symptoms and mood symptoms affecting his daily functioning?
* What are the most important next steps for him? What are his goals for the next year?
* Have there been any seizures?
* What about staring spells with loss of time where he could not return to the conversation?
* Any repetitive motor behaviors or unusual body sensation associated with staring spells?
* What is his mental status exam score today?
* Does he need an electroencephalographic (EEG) examination?
* Any repeat imaging? If so at what time-frame?
* What would you do about the headaches?
* Would you change or adjust any of the patient's current medications?
* What would you do about the benzodiazepine?
* What cognitive aids would you prescribe? Does he need a personal data assistant (PDA) or global positioning system (GPS)?
* Does he need a cognitive rehabilitation program?
* What TBI or PTSD reading materials/references would you give him?
* Does the patient need outpatient case management, vocational rehabilitation or other service referrals?