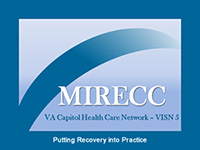 The mission of the VISN 5 MIRECC is to support and enhance the recovery and community functioning of Veterans with serious mental illness. Our integrated programs of research, education, and clinical training and consultation focus on the development, evaluation, and implementation of recovery-oriented evidence-based treatments and services for these Veterans.

Click on the plus (+) to expand the section and read more about each News Spotlight and the minus (-) to close that section. 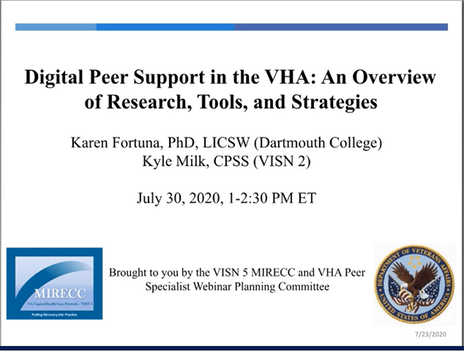 In partnership with the interdisciplinary planning committee of the VHA Peer Specialist Webinar Series, and under the coordination of Dr. Anjana Muralidharan, the VISN 5 MIRECC co-hosted a webinar about the use of digital tools to facilitate peer support in the VHA. The webinar was well-attended and had a great interactive discussion! Check it out here: https://bcove.video/3i3Y3z4*

*This webinar was presented in July 2020. Because telehealth in the VA is growing and evolving rapidly, some of the information presented here may be out of date.

VISN 5 MIRECC Post-Doctoral Fellow in Mental Illness Research and Treatment, Arthur T. Ryan, and colleague, Jordan DeVylder1, recently published a study that supports a relationship between psychotic symptoms and a history of solitary confinement. They found that formerly incarcerated individuals who reported psychotic symptoms or a schizophrenia diagnosis in the past year were approximately 50% more likely to report having experienced solitary confinement while incarcerated than those without psychotic symptoms. These results are particularly important to bring to light as social isolation may be associated with the development and worsening of psychosis (Hoffman, 2007).

Drs. Ryan and DeVylder used a dataset from the self-reported second Survey of Police-Public Encounters (SPPEII; DeVylder et al., 2018), which, among other things, assesses police violence exposure, mental health symptoms, and crime involvement. The individuals that participated in the study were located in Baltimore, Maryland and New York City, New York and reported a lifetime incarceration history (17.6%) consistent with other large-scale U.S. population research (Bonczar, 2003).

Think the VISN 5 MIRECC Fellows are an impressive bunch? We sure do! Interested in joining the ranks? See our Fellowship Program in Mental Illness Research and Treatment page for more information!

The Link is a guiding link between VISN 5 MIRECC research outcomes and practice and treatment applications. It includes an overview of a research article and then links those findings to considerations for Veterans, Veteran Families and clinicians. Our first Link is Coping with Psychiatric Medication Weight Gain Side Effects. To visit the Link webpage click here.

Using the Guiding Principles of Recovery to Cope During Physical Distancing

This resource was developed to support Veterans, Veteran Families and Clinicians during the COVID-19 pandemic. Adapting to a national emergency and maintaining physical distancing can be challenging to mental health. This resource uses SAMHSA’s ten guiding principles of recovery to provide direction for how to cope, even in these challenging times.  For more Resource E-Blasts on Recovery in SMI, click here.

Check out our other Educational Products with topics such peer support, mental health stigma, families and caregivers, older Veterans and more!